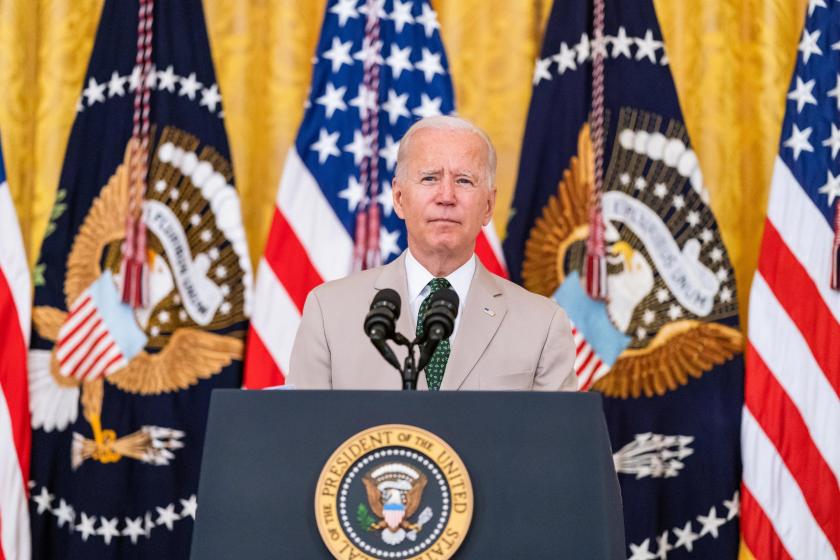 “Our forces will not engage in conflict with Russia in Ukraine. But we will definitely protect our NATO allies in the east,”

Biden stated that direct sanctions against Putin are on the table, but they will not take such a step at the moment.

Highlights from Biden’s statements are as follows:

“Putin chose this war. Now he and his country will suffer the consequences”

“We will restrict the financing of the Russian army”

“I have imposed strong sanctions and introduced new limitations. We have specifically designed these sanctions so that they have a strong long-term effect. I spoke with the G7 leaders and we all agreed. We will prevent Russia from trading in dollars, pounds and yen.”

“The Russian stock market has lost 50 percent of its value. Now we are blocking the Russian central bank. We are freezing 1 trillion dollars worth of assets. We are freezing the assets of its largest banks. We have blocked 4 more banks. All their assets in the USA will be frozen.”

“THE ECONOMICALLY COMPETITIVENESS WILL END”

“They will no longer compete economically. We will do more. Beyond the economic sanctions here. Tomorrow will be the NATO summit. In the next step, we will bring together all aspects of our NATO alliance. Our forces will not engage in conflict with Russia in Ukraine. But we will definitely protect our NATO allies in the east.” . NATO is now more determined than ever. An attack on one is on all of us.”

“We talked to my Minister of Defense and the General Staff. As we respond, we will use every tool at our disposal. We will not disrupt the global energy supply. If Russia launches a cyber-attack, we are ready to respond. We have been working with the private sector and the cyber sector for months. We will also protect ourselves against Russia’s cyber-attacks. In the early days of this conflict, Russian propaganda tries to make the military operations here successful.”

“Putin has betrayed the future of our world here and wanted to seize them by force. We will prioritize at the international level. History will write Putin’s choices. This is a useless war. Human dignity and freedom are stronger values. These cannot be suppressed by tyrants like Putin and his allies. Freedom.” will win.”

“No one expected the sanctions to prevent things. The sanctions need time to take effect. It is important that the Russian people realize what is going on here. Putin will not decide to withdraw because there are sanctions. Putin wants to see if the western world is united and we will unite.”

“I want to say that we will use all the means at our disposal. To protect the American people and businesses from gas prices. I do not want the American people and companies to suffer from this. We monitor the energy supply tightly. We are in contact with key oil producing and consumer countries. We are actively collaborating with countries around the world.” we are working.”

“I will do my best to reduce the problems with gasoline prices. An answer was definitely needed. We stand with freedom as the USA. I want to reiterate what I said last week. If Russia makes a cyber attack on our companies, we are ready to respond.”

“I talked to Mr. Zelensky last night. I assured him. I said that the US would support the people of Ukraine. We will help to alleviate the humanitarian suffering there. History has shown that unfortunately, there will be serious civil disobedience in such occupations. The situation will be deadlock. We will be with the Ukrainian people for weeks and months. Now they are independent for 30 years. No one can take their country from them anymore. Putin has attacked the countries that maintain global peace. Everyone saw the true face of Putin and his allies in the Kremlin. There was always a desire to attack. Putin’s He has a desire to build an empire.”