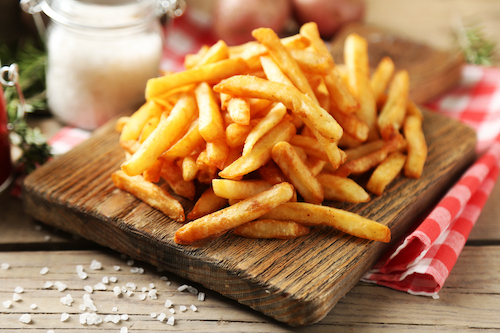 Raspatat is slightly darker and slightly thinner than regular french fries. They also have a different flavor. It is prepared in the fryer just like regular fries. Usually much shorter than normal chips. Rasp potatoes only need 1.5 minutes in the deep fryer at 175 degrees.

How to make rasp fries?
Raspatat is made by mixing potato powder with water. It’s actually a kind of mashed potato. This puree is then pressed with a special machine, which creates the shape of the well-known raspberry potato. That’s why shredded chips all have the same thickness and length.

Want to make your own rasp fries?
It is possible to make ras fries yourself. After all, the only ingredients are water and potato powder. The correct ratio is 1 kilogram of potato powder to approximately 1.75 liters of water. You need to have a special device to size the shredded chips. Of course, grated chips can also be made in other ways.

Where does the name RAS come from?
The name RAS relates to the creator of the raspatat. The name has been around since 1953 and is patented by the Rixona company. This patent actually involves obtaining potato powder. This method originated from an American named Richard Anthony Simon Templeton. This is where the name RAS comes from. This is the agreement between the two parties in 1953.